Amazon’s loving its Kindle owners. The retail giant is letting Kindle owners who sign up for its US$79 Prime service borrow an ebook each month for no extra fee. Prime is a premium service for Amazon customers that started as an offer of unlimited shipping for a one-time annual payment. That US$79 fee now includes the original shipping offer, a streaming video service with 13,000 movies and TV shows, and the Kindle Owners’ Lending Library.

The Prime service is restricted to US residents at the moment. In addition, to take advantage of the Kindle Owners’ Lending Library, you need to be — a 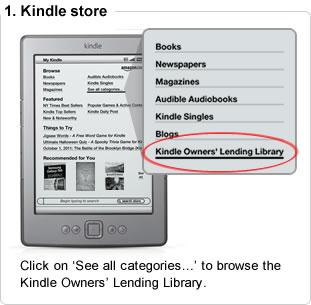 Kindle owner. A Kindle app user won’t cut it. Amazon is clearly using this to encourage its users to support the full Amazon kit.

Members of the lending programme can choose from an initial catalogue of 5,000 titles. There’s no time limit on their loan period but they can only check out one ebook at a time and they can borrow a maximum of one ebook a month.

And it looks like it’s not just libraries who struggle to get ebook lending rights from publishers. Amazon has had to do some arm-twisting itself to get publishers on board. There are no titles from the US Big Six publishers and the company admits that in some cases it’s actually buying a copy at full wholesale price each time the ebook is borrowed. Amazon is clearly determined to prove its belief that lending will be good for everyone, not just Amazon. “Kindle owners will read even more, publisher revenues will grow, and authors will see larger royalty checks,” argues Russ Grandinetti, Vice President, Kindle Content.

The Kindle Owners’ Lending Library follows Amazon’s move in September to open up the Kindle platform to ebooks borrowed from public libraries.  This initiative, again for US customers only, is operated through a partnership with library ebook distributor OverDrive and shows Amazon’s determination that its Kindle owners won’t be penalised for their loyalty: library ebooks are almost universally now in the EPUB format which isn’t directly readable on Amazon gadgets.

While today’s move is great for Amazon’s customers, and might be good news for publishers and authors, it should prompt libraries to consider how it might impact on them longer term. It’s clear now that lending books on a commercial scale will no longer be a de facto library monopoly. Amazon and others (Google has already hinted at some sort of rental service) are determined to supply digital content to consumers in as many ways as they want it. And they are sure to do it in a way that makes commercial sense for both Amazon and the publishers and authors who, for now, can call the shots on how — and whether — these deals are done.

One thing is for sure, when it comes to doing deals to get digital lending rights, libraries are no longer the only game in town. If libraries aren’t feeling threatened, they should. Are we going to see something akin to the impact of cash-rich pay TV which routinely outbids free-to-air and public service broadcasters for premium content? If our libraries become repositories of second-tier content, we’ll all lose. This doesn’t have to happen but it needs big changes all round to give our libraries the chance to stay relevant.