A couple of weeks ago, the publishing industry’s EPUB3 specification was finally signed off. This was the cue for device makers and e-reading app developers to build it into their next releases and for publishers to start work on enhanced ebooks. Now Amazon has responded with its own next generation ebook format, Kindle Format 8 (KF8), complicating things for publishers.

Like EPUB3, the new Kindle format introduces support for the latest web standards, HTML5 and CSS3, and adds a host of new features that will allow development of much richer ebooks. From Amazon’s announcement: 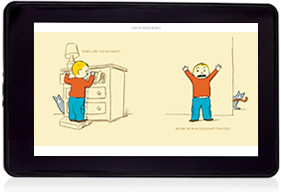 This is good news. But for those of us who had hoped that EPUB3’s arrival might prod Amazon into adopting direct EPUB support, this announcement is a pretty clear indication that, if it comes at all, it will be some way into the future. We’ll have richer, higher quality ebooks but we’ll have incompatible formats. For the time being, this probably won’t bother Amazon’s users who are a happy lot. Amazon has done a great job of pleasing them with an eco-system that’s easy to use, with the best selection of ebooks, and support for most of the e-reading devices they’re likely to want to use.

But for publishers, it could add challenges as the new features these formats offer mean ebook production requirements and costs will scale up. And for the newly-minted EPUB3, it poses a challenge to stay relevant as Amazon’s importance as the number one sales channel might tempt some publishers to bypass it.

Even where sales of EPUB ebooks lag behind Kindle sales, many publishers have now built their workflow around EPUB as their primary source files. These convert well into the current Kindle format, allowing publishers to maintain a single format. To keep this workflow, it will be important that Amazon supports error-free EPUB3 conversion in its Kindle Gen 2 toolset. But as complexity increases, so do the opportunities for things to break. We won’t know until Amazon releases more details whether EPUB3 can continue to serve as this reference format. Indications are that EPUB3 is a richer format so publishers might want to restrict themselves to a feature subset that’s common to both platforms. No mention yet, for instance, of JavaScript support, MathML, or EPUB3’s extensive accessibility features.

It will certainly be in Amazon’s interests to make sure that ebooks look and function as well on a Kindle as they do on an EPUB3-compatible e-reader. What we still don’t know is whether Amazon might use its current dominance to lead, rather than follow, the industry standard. We’ve seen this in the “browser wars” that for many years saw web browser vendors, especially Microsoft, introducing non-standard features to try to keep users in its camp and drive the standards in ways that suited their interests. Could we be in for the e-reader wars?

We might start to see the so-called “embrace and extend” strategy that’s familiar in the wider tech world. This tug-of-war strategy sees a dominant vendor selectively adopt an industry standard in a show of inclusiveness but extend it with unique features in an effort to draw developers and users into its ambit. We’ve already seen Apple filling the vacuum prior to the release of EPUB3 with its own ‘fixed layout EPUB‘, an extension of the EPUB standard aimed at the illustrated book market that only works with its iBooks e-reader app.  Here’s hoping EPUB’s dream of a single format isn’t stillborn and Amazon, Apple and others decide to play nicely this time. Otherwise, publishers and users will get caught in the cross-fire of another format battle.